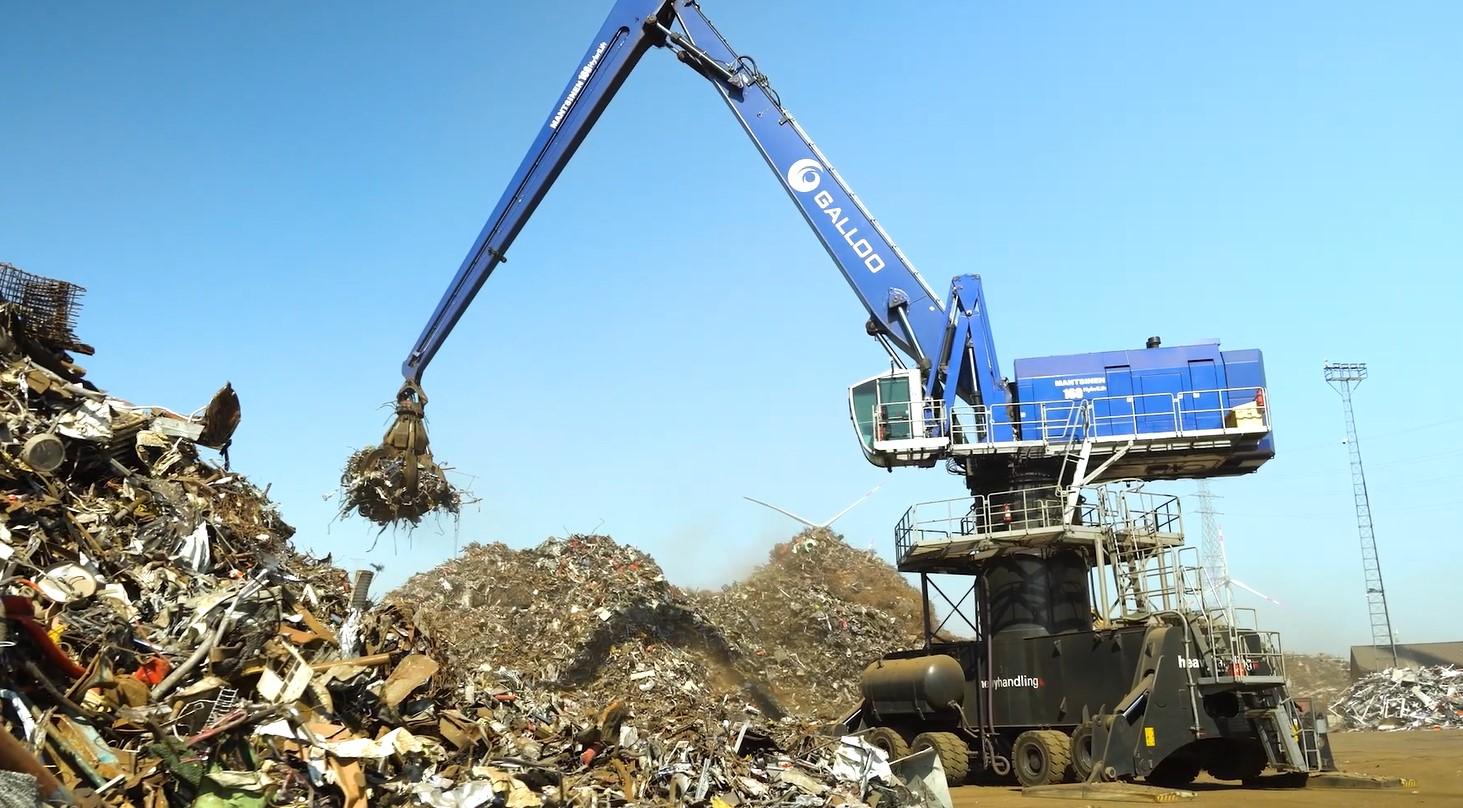 Galloo Gent at the port of Ghent in Belgium is a hub for international scrap trade. Every year around 900,000 tons of steel scrap is exported through Galloo to customers around the world. To increase the Export Terminal efficiency, Galloo acquired a Mantsinen 160M material handling machine.

Galloo is one of the leading European recycling companies. Its sites are located in Belgium, in northern France, and in the Netherlands.  The core business is transforming ferrous, non-ferrous, and plastic waste into new raw material, which is then sold worldwide for further use. Galloo exports scrap mainly through its export terminal Galloo Gent.

“When we expanded Galloo Gent, we needed a robust crane that can handle the heavy scrap loads. We also wanted the machine to be very flexible, so it could easily move around in the terminal. Thirdly, it should  also have low operational cost. These criteria led us to choose the Mantsinen 160M”, says Lieven Neerinck, Galloo´s Export Manager and Site Manager at Galloo Gent.

“We also had one specific requirement, which was a water tank that can be used during loading and unloading to settle the scrap dust that is an environmental and a workplace hazard. This equipment was installed by a local subcontractor in good coordination with Mantsinen Group.”

When we expanded Galloo Gent, we needed a robust crane that can handle the heavy scrap loads. We also wanted the machine to be very flexible, so it could easily move around in the terminal. Thirdly, it should also have low operational cost.

The Mantsinen 160M has increased flexibility and efficiency. Unloading is now much faster and it enables a quicker turnaround of the vessels

“The main role of the Mantsinen material handler is to discharge barges quick and easy, and another is to pile up scrap before the vessel arrives. Sometimes we also use the Mantsinen together with other cranes to load a vessel. This flexibility is very important to us. Unloading is now much quicker, and instead of discharging two barges a day we can now discharge four barges a day.

Piling up scrap is also much easier, and the Mantsinen harbor crane has replaced at least two cranes in doing that.”

In addition to efficiency and flexibility, Neerinck also compliments the usability of the Mantsinen material handling machine.  “I have gotten good feedback from the operators and they are very happy with the Mantsinen. It is well-equipped, comfortable, and safe and easy to use.”

Dust suppression is an extremely useful function and it is used in applications where fine particles or dust are present, for example scrap handling. The dust suppression function sprays a mist of water during the operation of the grapple and prevents the dust from coming out of the materials.

“During the production process we visited the factory in Finland and got a very good feeling about the company and how the machines are made. Mantsinen is a family-owned company like us and it was nice to see those values present.”

What about the future then?

“I think efficiency, security, and cost will become more and more important in the near future. The  manufacturer who can combine these in the best possible ways will have a very bright future ahead of them, and I must say that Mantsinen is performing very well on these.”

This website uses cookies to improve your experience while you navigate through the website. Out of these, the cookies that are categorized as necessary are stored on your browser as they are essential for the working of basic functionalities of the website. We also use third-party cookies that help us analyze and understand how you use this website. These cookies will be stored in your browser only with your consent. You also have the option to opt-out of these cookies. But opting out of some of these cookies may affect your browsing experience.
Necessary Always Enabled
Necessary cookies are absolutely essential for the website to function properly. These cookies ensure basic functionalities and security features of the website, anonymously.
Functional
Functional cookies help to perform certain functionalities like sharing the content of the website on social media platforms, collect feedbacks, and other third-party features.
Performance
Performance cookies are used to understand and analyze the key performance indexes of the website which helps in delivering a better user experience for the visitors.
Analytics
Analytical cookies are used to understand how visitors interact with the website. These cookies help provide information on metrics the number of visitors, bounce rate, traffic source, etc.
Advertisement
Advertisement cookies are used to provide visitors with relevant ads and marketing campaigns. These cookies track visitors across websites and collect information to provide customized ads.
Others
Other uncategorized cookies are those that are being analyzed and have not been classified into a category as yet.
SAVE & ACCEPT